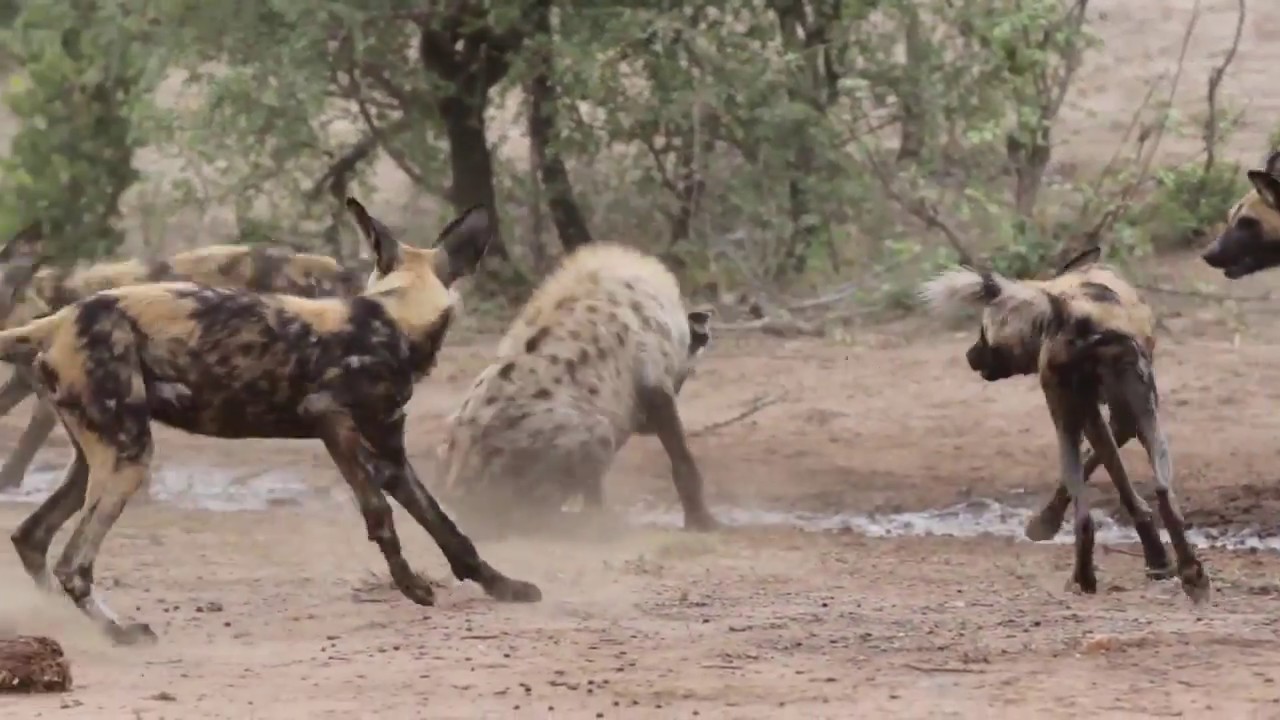 When a lone female hyena encountered a hostile pack of wild dogs at a waterhole near nThambo Tree Camp at Africa on Foot in the Klaserie Private Nature Reserve, it made for quite the spectacle. 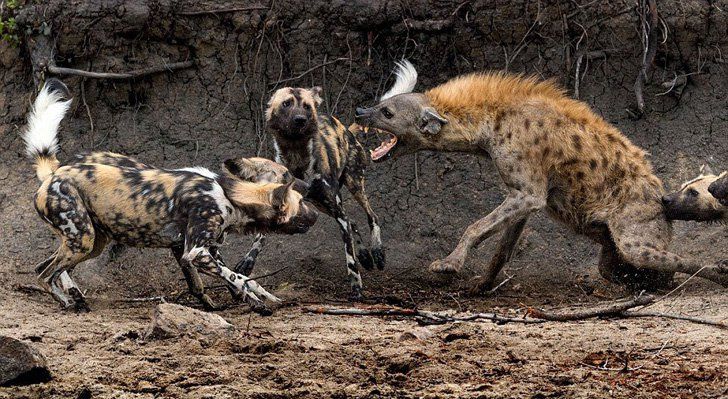 Hyenas get a bad rap. From The Lion King to the recent Mowgli: Legend of the Jungle, hyenas are portrayed as vile, cowardly, loathsome creatures. But in actual fact, spotted hyenas in particular, are more than scavenging, carrion-eating, high-pitch laughing villains; they’re highly intelligent, fearsome hunters that are to be revered and respected. 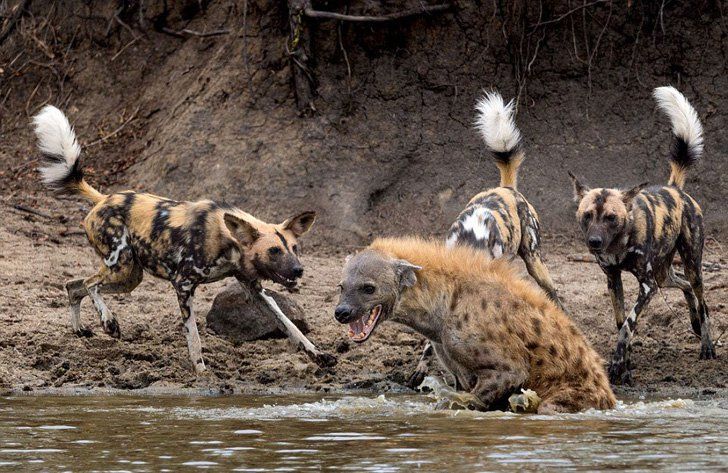 Why this particular female spotted hyena thought it a good idea to have her bath time at this waterhole, while there was a huge pack of excitable and antagonistic wild dogs in the vicinity, is unclear. But in hindsight, she’ll probably regret not legging it as soon as the dogs arrived. Speaking of intelligent and fearsome hunters, though, wild dogs are almost without rival in the wild. 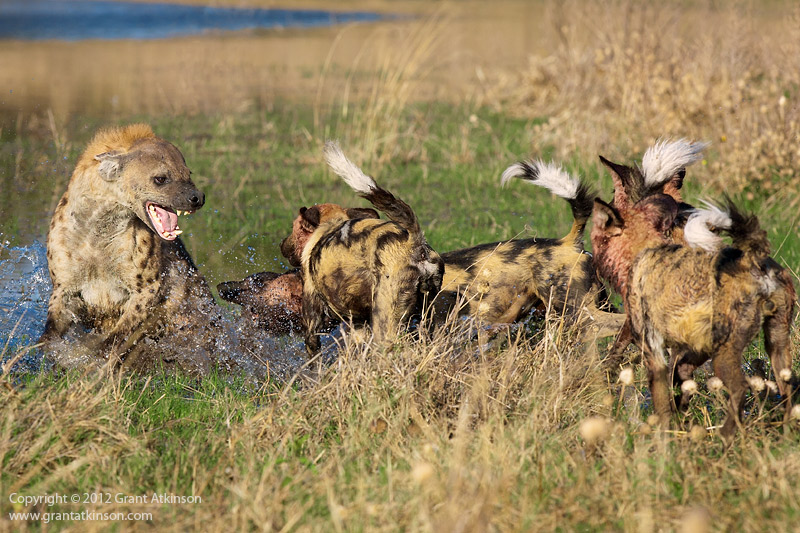 The level of organization, communication and intricate hunting strategies they employ are perhaps only bested by the killer whale. This pack is regularly sighted in the Klaserie and, when you consider how endangered these creatures are and how rarely they’re seen, guests of Africa on Foot have been extremely fortunate to catch a glimpse of them time and again over the last few weeks. This pack is massive and numbers 23 dogs in total. They’ve recently come out of their denning period, so the pups are also in the mix. Wild dog breeding is incredibly interesting. They are what is called cooperative breeders, which means only the alpha pair breeds, and only their litter is nursed and fed during this time, usually in a vacated aardvark hole where the pups can be protected from potential predators. Coinciding with the denning period, is the impala rutting season, which means male impala are usually tired from rutting and become easy prey for these clever painted hunters. In the video, the dogs are probably preparing for just such a hunt, when they come across the hapless hyena. Being fierce food-source rivals, they probably thought it a good opportunity to get one over on the competition. 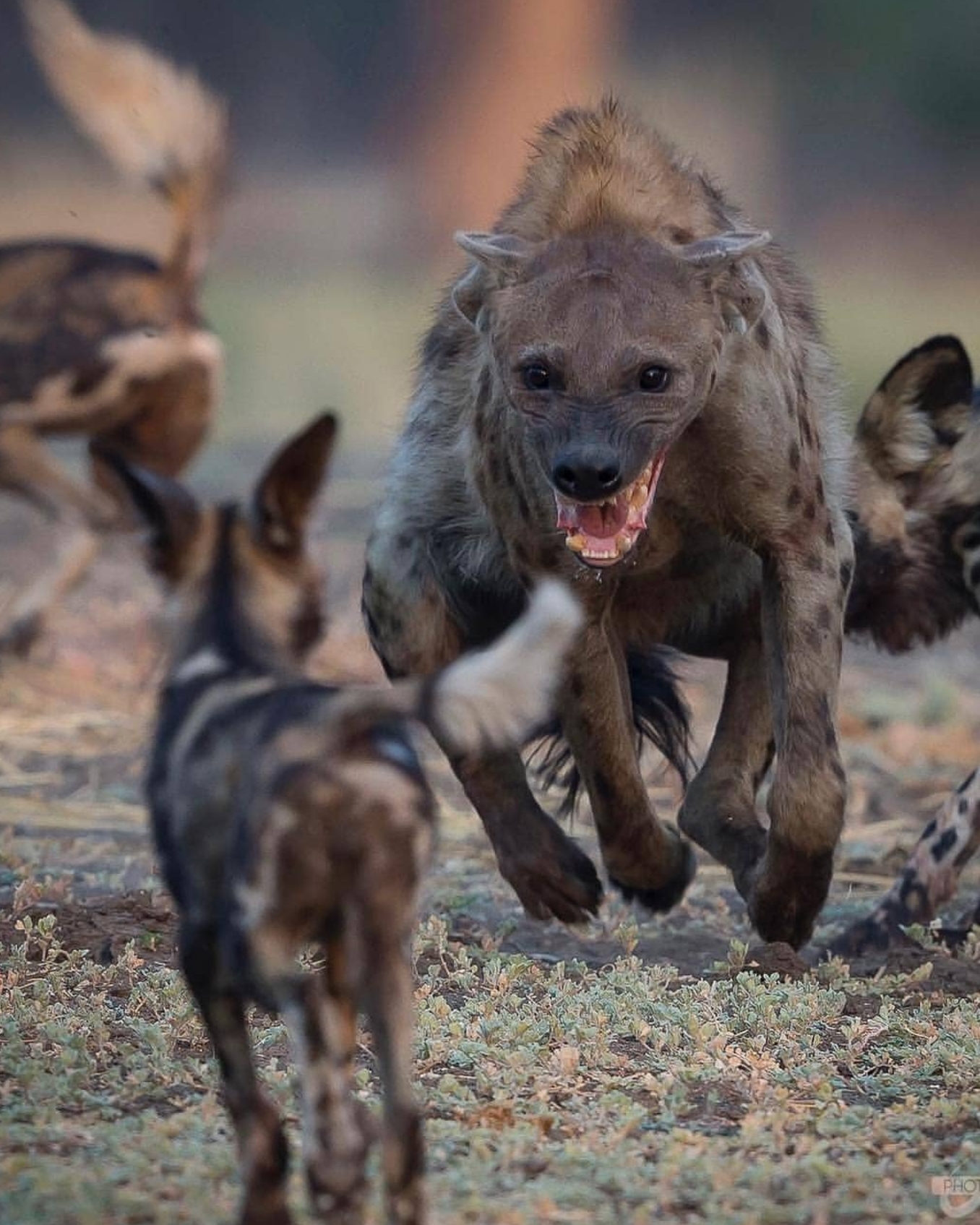 The hyena, vastly outnumbered, tries her best to fight them off while not showing them too much of her haunches, before eventually backing into the waterhole and trying to intimidate the dogs with her dangerous dentistry (apart from crocodiles and hippos, the hyena has the strongest bite in the African wild).

The wild dogs eventually call off the chase, perhaps rather conserving their energy for the upcoming hunt, and the hyena escapes with a few painful bite marks, but lives to fight another day.

Completely outnumbered, this 1 #Hyena throws down with 14 #WildDogs all by himself! 😲 pic.twitter.com/CcQ70Yk44M