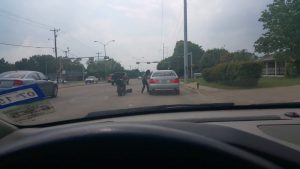 Two men, one in a motorbike and the other in a car got into a fight right in the middle of the road, close to a junction.  The man who rode the motorbike got down from his motorbike and went to fight the other man in his car. There was a lot of punch throwing from both men who looked very furious. 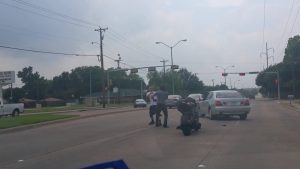 After it looked like they were finished fighting,  the person who was driving the man in the car tried to drive away but was most likely stopped by the man who was fighting, maybe because he felt he had not fought the other man well enough. After driving to the middle of the road, the car stopped and the man who was involved in the fight got down and went on to attack the motorbike rider, which made the fight continue. 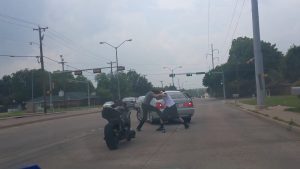 The motorbike rider thought the fight was over when he saw the car moving but as soon as he noticed the other man was approaching him, he quickly stood up to defend himself. The fight continued right in the middle of the road as they threw punches, which made passing cars need to slow down to prevent any accident from happening. 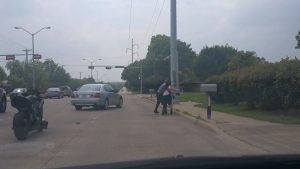 The man looked skilled in boxing, as they were able to throw punches and decent themselves well from getting hit by the opponent. The driver of the car then moved the car to the side of the road to allow the free flow of traffic while the men continued fighting. 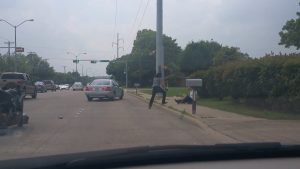 The motorbike rider landed a few heavy punches on the face of the other man, one of the blows even made the other man fall to the ground but he quickly had to stand up to defend himself.  Most likely he noticed from the few punches that landed on his face that the fight wasn’t going his way so he went on to enter the car. They continued verbally insulting each other as they went their different ways.

Biker And Motorist After Accident In Texas pic.twitter.com/H3RV7bW9lN