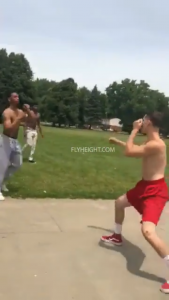 In this day and age, fighters come in all shapes, sizes, and colors. Where once white guys didn’t need to know how to defend themselves to the same extent as other ethnic minorities, now, fighting is a pastime and physical pursuit that many from all walks of life enjoy equally.

So when a disagreement between two teenagers descended from a debate to a war of words, things got pretty damn nasty. The story goes that the black kid in the clip below grossly generalized by saying that white guys can’t fight. It turns out they can, he could and he did. 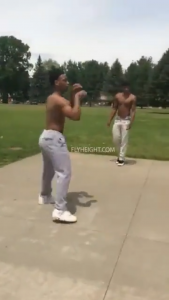 The two teenagers encircle each other as the clip opens with trash being thrown in both directions. The black dude is considerably larger than the white guy, who to be honest, looks a little weedy. His stance, though suggests that he knows how to handle himself. He is definitely going to have to bring it if he is going to stick it to the likes of his opponent. He darts in and out, landing strikes to the jaw and face, but just feeling him out for the most part in the early stages. Then things get a little more serious as he comes in for a takedown to the concrete. 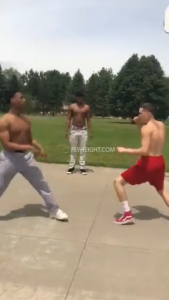 The black dude stands up in the hold and we think he has got the white guy’s measure. But out of nowhere the white guy manages to get his feet off the ground and they both end up in a grapple with the white dude gaining the upper hand. 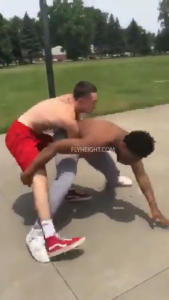 The black guy tries everything to get out of his predicament, but things are not going well. Despite the advantage, the white guy is not happy with his positioning and lets go to readjust. 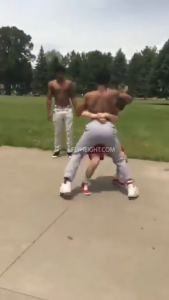 The black guy is more comfortable on his feet, striking but is pretty gassed after all that grappling. The white guy manages to take him down again, this time getting him into an amazing choke hold. The black guy struggles again in vain and ends up unconscious. The white guy gives him a victory slap and he parades off victorious as the clip closes. Check out the action here.