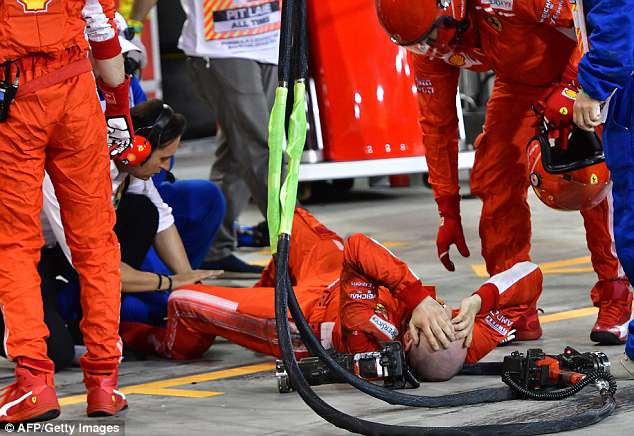 The Ferrari mechanic run over by Kimi Raikkonen gave a thumbs-up from his hospital bed after surgery on his broken leg. Francesco Cigarini posted the picture of himself smiling, but in plaster. Ferrari said the operation had been a success, but the mechanic, 41, is not expected to return to Italy until midweek. 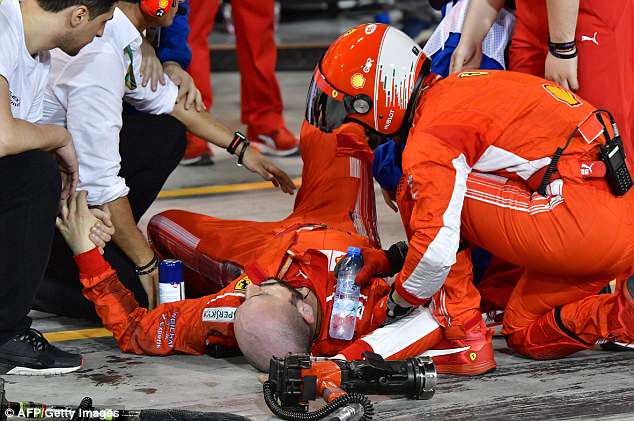 Cigarini was thrust into the spotlight after Sunday’s Bahrain Grand Prix when Raikkonen was released from his pit stop before the mechanic had been able to fit a new wheel. 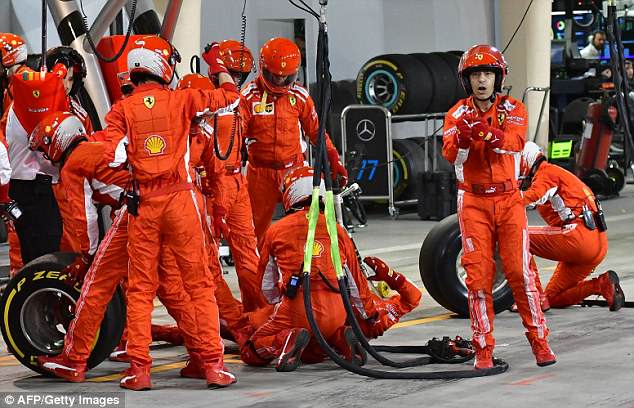 He broke the tibia and fibula in his left leg. ‘Surgery OK,’ said Cigarini in a photo posted on his Instagram account. ‘I have to thank all the people who worried for me. Nothing else. Just a big thanks. Hugs.’ 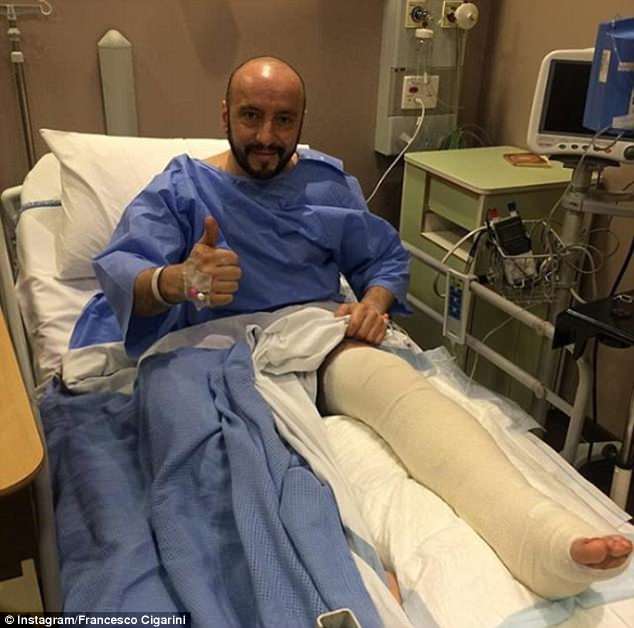 Raikkonen came in for his second tire change of a dramatic Grand Prix after 36 of 57 laps, but the left rear tire was not secured properly. The driver was given the green light to go but it was an unsafe release and, as he pulled away, his car hit Cigarini, whose leg buckled. 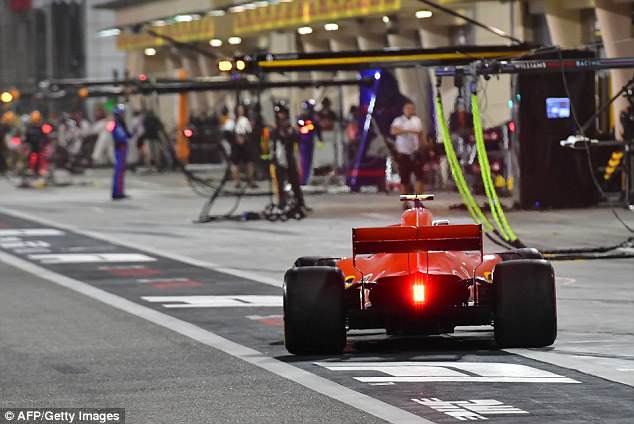 Cigarini suffered a ‘shinbone and fibula fracture,’ according to Ferrari, who were later fined €50,000 (£44,000) by the FIA for the unsafe release of Raikkonen’s car. The mechanic was rushed to the BDF Hospital, located some 20 minutes from the Bahrain International Circuit where he underwent surgery on Sunday night. 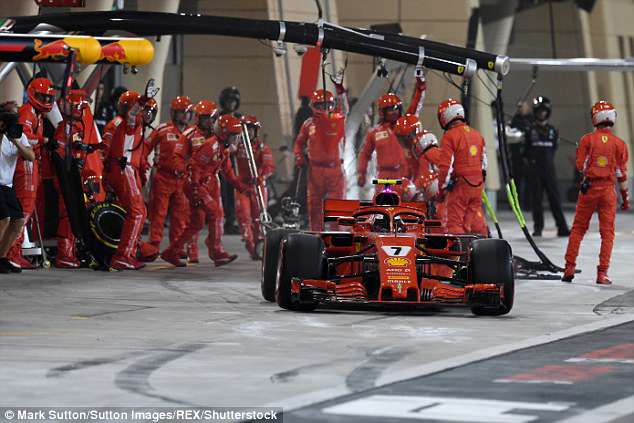 Raikkonen’s car came to a halt a few meters along the pit lane and he removed the steering wheel and dejectedly threw it into the cockpit. The Finn’s frustrations was evident as he snatched a water bottle and walked back into the garage without checking on the stricken mechanic. 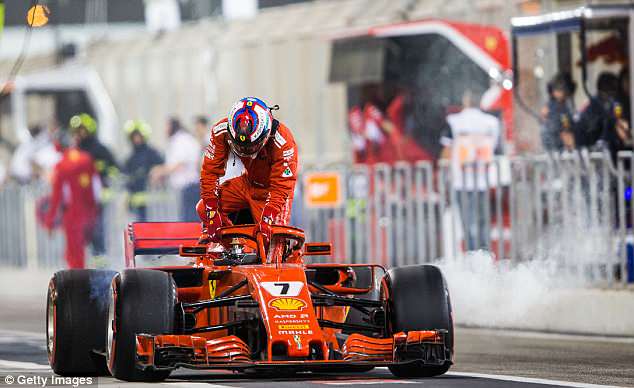 It was the second time the Ferrari team have been fined this weekend for an unsafe pit release. They were fined €5,000 (£4,365) during practice on Friday and have launched a full investigation into the problems. 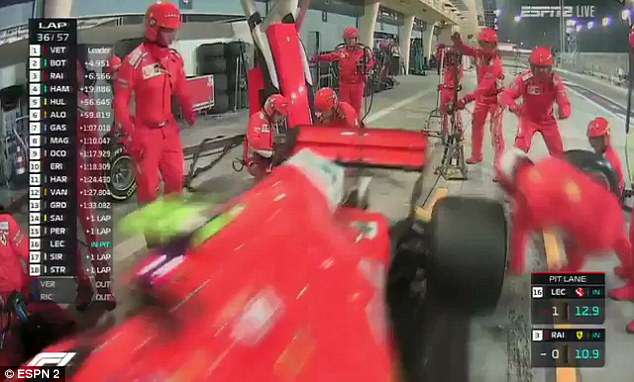 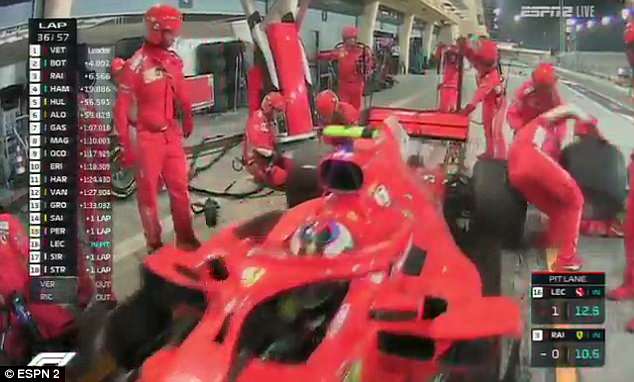 Raikkonen’s team-mate Sebastian Vettel made it two straight F1 wins after victory at the season-opening Australian GP two weeks ago, sealing his 49th career win on his 200th race start. But celebrations were muted. ‘A bit sad because one of our mechanics got injured,’ Vettel said. ‘A mixed day overall.’

#Ferrari #Mechanic Gets His Leg Snapped In Half During #F1 #Racing Live Broadcast pic.twitter.com/VY3v3ZvByY