He Was Warned… Multiple Times… “Just Walk Away Bro” It’s fair to say that we all can be prone to the various kinds of road rage. Whether it is someone cutting you off, not signalling when they turn, or an parking like an idiot, there’s just something about cars that amp up our frustration. This confrontation is apparently related to poor parking and took place outside a Gold’s Gym in California USA. 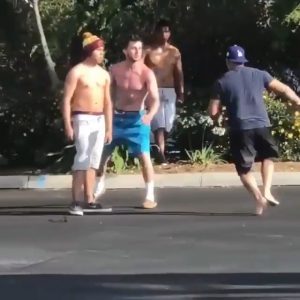 The guy in a blue shirt has left his car to have an argument with the shirtless man. Based on their conversation, the man in the blue shirt appears to have been the provocateur of the situation. While the shirtless man warns him to get back in his car if he wants to avoid getting hurt. “I’ll knock the f*ck outta you b*tch. You’re gonna get socked up in front of your wife. Get back in your car p*ssy.” The clearly irate man shows no signs of heeding the threats, however, and continues to get in the shirtless man’s face. He throws a weak jab that does little to deter the shirtless man, and the fight is now on. 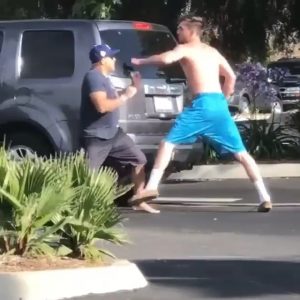 Despite this, it appears that he is okay and continues undeterred. Then the third punch lands. Unlike the previous two, this right-hand lands right on the button. The shirtless man uses the older guy’s momentum against him, knocking him out cold onto the ground as the onlookers go crazy. To make matters worse, as the older guy then attempts to get to his feet. To ensure he doesn’t try to fight again, he is pushed over and lands face-first on the concrete. Maybe next time he’ll learn that sometimes it is better to just walk away.