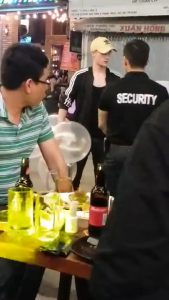 Security guards have a pretty tough gig. It cannot be easy having to deal with drunk or stupid members of the public on a daily basis. To be honest, it’s amazing that there are not more reports of bouncers going nuts and taking out lines of patrons who are acting up. It certainly takes a special kind of person to deal with that kind of thing so regularly.

The clip below shows a different kind of bouncer, however: one that finally snaps. The scene is set in Vietnam, a popular downtown spot. There is a bouncer that is conversing with a white guy who is inexplicably carrying four large balloons. 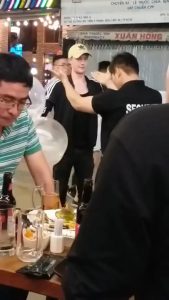 He looks a little worse for wear as well, perhaps having a few beverages before the clip opened. In any case, his judgement is clouded enough for him to believe he can bring balloons into a bar without a problem. He is dressed like an absolute chav, complete with 3-stripe jacket and cap.

As he tries to converse with the bouncer through an obvious language barrier, the bouncer responds non verbally by gesturing that he needs to move on. However, the chav doesn’t seem to want to heed the bouncer’s instructions and mouths off repeatedly.

It is impossible to hear what the kid is saying. But the bouncer is copping the tongue lashing on the chin. We think that he doesn’t understand, but then the chav says something that sets him off. Out of nowhere, he throws an absolutely epic elbow, landing flush against the kid’s jaw and send him flying backwards. 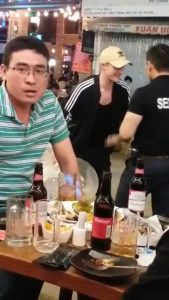 He stacks onto the pavement and lays there in all sorts of trouble. The crowd of onlookers generally think it is great fun, a lot of them laughing at the kid’s misfortune. The bouncer doesn’t follow up with any punches, his work is done. 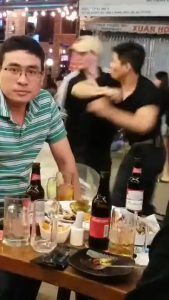 The kid struggles to a seated position and we see that he has lost a few teeth from the strike. He has also lost a balloon which is retrieved and returned by a nice little girl. Check out the brutal strike below!